Eboni Foster was born in Sacramento, California, later moving to the San Francisco area. There she was a fixture of area talent shows, and at the age of nine cut her first demos. Just five years later, Foster issued her debut solo recordings, soon after joining the vocal trio Nuttin' Nyce, appearing on their 1993 effort Down 4 Whateva. Her debut LP, Just What You Want, appeared in 1998.In 1995 she featured on Tupac’s song Heavy In The Game on Me Against The World album and on lot of other hip hop songs like E-40' Keep Pimpin' etc 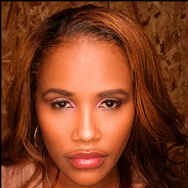