The Beastie Boys is a groundbreaking, pioneering, Grammy award winning rap group from New York City that has sold over 40 million albums worldwide. The group has been inactive since the death of founding member Adam “MCA” Yauch in 2012. According to Bad Brains bassist Darryl Jenifer, the name came from the code word ‘beast’, which was yelled whenever a policeman arrived as musicians were selling drugs outside a record shop that doubled as a rehearsal space for bands in the early 1980s.

Originally a punk rock band named The Young Aborigines consisting of Yauch, Kate Shellenbach, Michael “Mike D” Diamond and John Berry, the band renamed themselves Beastie Boys and released the Polly Wog Stew EP shortly before Berry’s exit in 1982. Berry was replaced by Adam “Ad-rock” Horowitz and the band recorded a disco-joke parody of Malcolm McLaren’s “Buffalo Gals” titled “Cookie Puss” the following year. Producer Rick Rubin took an interest in the song, envisioning the group as ‘the first white rap group’ – but without Schellenbach. Rubin founded Def Jam Records soon after and signed the group as a trio.

Their first rap single, 1984’s “Rock Hard”, featured an uncleared sample of AC/DC’s “Back In Black” and was promptly recalled. However, its b-side “Beastie Revolution” was used without authorization in a British Airways commercial, resulting in a $40,000 settlement that the band used to embark upon a full-time rap career.

“She’s On It” followed in 1985 on the Krush Groove soundtrack. That year, the band toured as the opening act of Madonna’s Virgin Tour after Russell Simmons told her management Run DMC wanted $20,000 a show, but he had another rap group that only charged $500. MCA later shared what their nightly set consisted of:

We did like three songs, and then I did the electric boogaloo for a minute, and then we fucked with the audience. They hated us. Kids literally in tears, parents wanting to kill us.

In the summer of 1986, “Hold It, Now Hit It” reached #55 on the US Hip Hop/R&B chart. Licensed To Ill followed that November as two other tracks from it became minor hits on the same chart. However, it was the satirical frat-boy anthem “(You Gotta) Fight For Your Right (To Party!)” that launched the band into international stardom – reaching the top 20 in five countries in early 1987. Within weeks, four more of the album’s tracks found scattered international chart success in its wake. Licensed To Ill became the first hip hop record to reach #1 in the US, topping the Billboard 200 for seven weeks and ultimately staying on the chart for 73 weeks as the group headlined their Licensed To Ill Tour for several months. By the end of the year, they’d split with Rubin and Def Jam over unpaid royalties.

The Beasties then moved to LA looking to shed the frat-boy image they’d gained by emulating (and ridiculing) it on Licensed To Ill. Delicious Vinyl CEO Matt Dike hooked them up with the pioneering sampling duo Dust Brothers who’d just had top 10 successes with Tone Loc and Young MC. The result was a drastic change in sound with 1989’s funk-infused, disco-influenced Paul’s Boutique. Despite its lead single “Hey Ladies” achieving moderate chart success in five countries including a top 40 placement in the US, the album was labeled a flop. Years later, however, it would be named one of the best albums of all time by Rolling Stone, Spin, VH1, Pitchfork and Time Magazine, and lauded as “The Sgt Pepper of hip hop”, an album that “single-handedly redefined a whole musical generation’s approach to sampling”.

Another massive change in sound happened with 1992’s Check Your Head when The Beasties picked instruments up again, looping pieces of organic jam sessions to rap over and creating an eclectic collection of hip hop, punk, funk and rock. The band also began to transition away from misogynistic and boisterous lyrics, tackling more mature themes like peace, love, equality and spiritual enlightenment. The album reached the top 10 in the US, but its singles found little chart success there or abroad. Tours with opening acts Rollins Band, L7 and Cypress Hill demonstrated how this diverse album appealed to rock, alternative and hip hop crowds at the same time.

The US chart-topping 1994 album Ill Communication continued this more organic sound and mature lyrical approach. The album’s lead single “Sabotage” only charted well in the UK, Canada and The Netherlands, but nonetheless became a huge underground success in the US aided by a music video directed by Spike Jonze. The album was supported with a worldwide tour, followed by a spot on Lollapalooza ‘94. Random diverse releases followed: the compilation of previous material Some Old Bullshit, the punk-rooted Aglio e Olio, and the instrumental The In Sound from Way Out!. During this time, the group became very active with social causes like the Free Tibet movement, largely spearheaded by MCA.

Hello Nasty marked another large shift in sound for the group in 1998 with the incorporation of electronic elements and the addition of master turntablist Mix Master Mike. Its lead single “Intergalactic” became the group’s third and final US top 40 hit, also charting well in ten countries overseas and winning a Rap Grammy the following year. The follow-up single “Body Movin'” found scattered success overseas, and the album shot into the top 5 in fifteen countries and earned the Beasties another Grammy. An anthology titled The Sounds of Science followed in 1999. The more straightforward hip hop To The Five Boroughs appeared in 2004 with a heavy focus on the group’s political views. Its lead single “Ch-Check It Out” made the top 40 in eight countries overseas, and was a minor hit in the US.

Five years later, the instrumental The Mix Up surfaced. The Beasties had originally planned to drop Hot Sauce Committee Part One in 2009, but soon after the release of the advance single “Too Many Rappers”, the group announced that MCA was diagnosed with cancer and the album was put on hold while he began treatment. A year later, the Beasties gave a tongue-in-cheek announcement that Part One was being replaced by Hot Sauce Committee Part Two, and would consist mostly of the songs intended for Part One. “Make Some Noise” became the official lead single for Part Two in 2011, accompanied by a short film titled Fight For Your Right (Revisited). The Beasties were inducted into the Rock And Roll Hall Of Fame that December, but MCA was too sick to attend. Six months later, MCA passed away. In 2014, Mike D revealed that he and Ad-rock promised him they wouldn’t make more music as the Beastie Boys after his death. 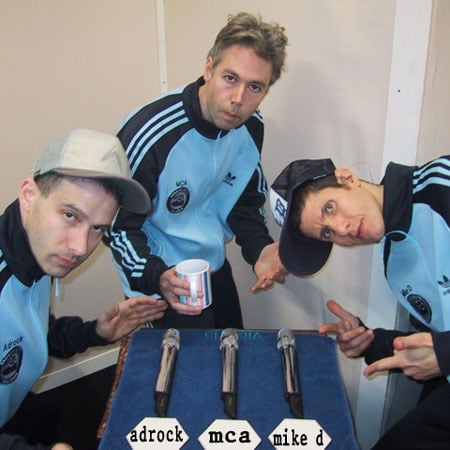