Adam Stevens, better known as Bias B, is an Australian rapper from Melbourne. He started writing raps at a young age and has been performing since the early 1990s.

He has released six albums, one EP and a collaborative EP with Lazy Grey and Len One under the name Boney & Stoney, which was self-titled.

The name Bias B comes from the Bias frequency on a cassette tape. 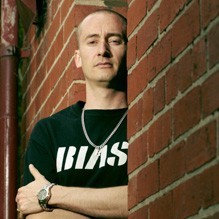