Domingo, is a producer from East New York Brooklyn and is of Latin origin. He has produced for some of Hip Hop’s most respected and well-known artists such as Big Pun, Fat Joe, KRS-One, Rakim, Kool G Rap, Ras Kass, Joell Ortiz, Crooked I, Chris Rivers, Eminem, and many more.

Domingo’s discography is like a who’s who of Hip Hop music with over 357 produced records and over 250 placed beats for score music on various tv shows, and movies under his belt he has proven to have made his mark not only in the music and entertainment industry but he has his legacy foundation imprinted in the world of Hip Hop forever.

Domingo has been sitting behind the board for some of the greatest mic controllers ever to do it – past and present since passing a demo to Marley Marl back in the ‘80s. He has supplied some of the most definitive beats for more than 30 years and is every bit as responsible for carving the classic East Coast flavor as damn near anybody out there. 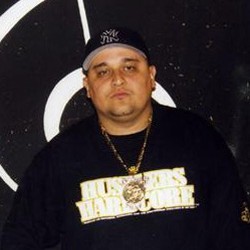