Daniel Dumile (July 13, 1971 – October 31, 2020), a.k.a. MF DOOM, (who also rapped under further alter egos Viktor Vaughn and King Geedorah and in the collaborative project Madvillain) was an English-born American hip-hop artist, best known for his “super villain” stage persona and unique lyricism. In 1988, he formed the group K.M.D.—which stands for “Kausing Much Damage”—with his brother, DJ Subroc. At the time, his stage name was Zev Love X. KMD was eventually signed to Elektra Records after some minor hype, and they released one album titled Mr. Hood. In 1993, before the release of their second album, Black Bastards, Subroc was struck and killed by a car. After his brother’s death, Dumile quit rapping and lived on benches for three years. He soon began rapping underground with his now iconic mask.

This disguise was based on a prop mask from the May 2000 film, Gladiator. In 1998, DOOM told Ego Trip, “it’s music we’re selling, not my face.” You can see how DOOM’s mask changed through the years here. Dumile then adopted the MF DOOM identity, based on Marvel supervillian Doctor Doom. Although, he told an interviewer that the name was actually a nickname from his mother:

Yeah and for the record I didn’t get the idea from [Doctor Doom]… [laughs]. I been Doom ever since I was born, my momma call me Doom so…

In 1999, DOOM released his debut solo album, Operation: Doomsday. The album had three singles: “Dead Bent,” “Operation: Greenbacks,” and “The M.I.C.” For his next album, Take Me To Your Leader, DOOM introduced a new moniker, King Geedorah. After that, he released Vaudeville Villain and Venomous Villain under the moniker Viktor Vaughn.

In 2004, under the name MF DOOM, he released MM.. FOOD—an anagram of M.F. DOOM. His next solo album, Born Like This, mostly fell under the radar, but is still beloved by fans. It spawned multiple classic songs, such as “Gazzillion Ear,” “Ballskin, ” and the lyrically-inclined “That’s That.” DOOM then received critical acclaim for his 2004 collaboration with producer Madlib, titled Madvillainy. With a 93/100 score on Metacritic and praise from hip-hop legends, Madvillainy is known as one of the best rap albums of all time. DOOM told an interviewer why he likes collaborations:

I love collaborating, I’m a team player. I love it when I’m working with other artists and see how they get down and exchanging ideas, it’s fun.

During his rap career, DOOM used a plethora of aliases and monikers, including: Metal Face DOOM, Metal Fingers, Madvillain, DANGERDOOM (with Danger Mouse), DOOMSTARKS (with Ghostface Killah), JJ DOOM (with Jneiro Jarel), and NehruvianDOOM (with Bishop Nehru). Luckily, Genius has a tag that houses all of DOOM’s aliases, monikers, and collaborations here. Each of DOOM’s characters have their own personas and he explores the meaning behind these various personas in an interview at the Red Bull Music Academy:

The idea of having different characters is really to get the storyline across. The idea of having one different character all the time, to me, makes – to me – the story boring… So the more, the better with me. This way I could come from one point of view, another point of view. They might even disagree on certain things. I think a lot of times, especially in hip-hop, artists get pigeonholed into being, ‘You’re the guy.’ It’s kind of limiting in a way. I look at it like I’m the writer. Same way with the skits. Have the record tell the story

Regarding the main character of MF DOOM in particular, he elaborated:

He’s more like the old-school, OG, old-timer villain. He’s the typical villain you’d have in any story. A lot of people misunderstand him, but he’s always looked at as the bad guy, but really he’s got a heart of gold. He’s for the children. He’s like a Robin Hood kind of character.

Also an established producer, DOOM released multiple compilation albums of his beats, such as the Special Herbs series. He spoke about his producing/songwriting process in the same interview:

What I usually do when I’m producing a record, I’ll come up with the beat first, and then the beat will inspire the lyrics, you know what I’m sayin'? […] I heard the loop first, cut the loop, put the drums to it, polish it up with the 808s, but I don’t really over-do it too much. I like to try to keep it as close to the original as possible. Leave something for the imagination, but enough to get the translation across. Then just write to it, keep it simple.

Using his JJ DOOM collaboration album as an example, DOOM explained the process behind his iconic, obscure TV dialogue samples and skits:

I don’t watch TV but I do that all day. I be cleaning the house and playing some obscure, weird shit. And it’ll be fun stuff, I bump into some interesting things. 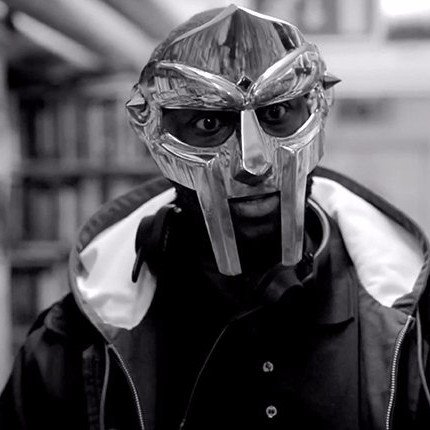