RM, was born in 1994 as Kim Namjoon (김남준), in Dongjak, South Korea (later, he grew up in Ilsan). He is a rapper, songwriter, composer, and producer. He is also known as the leader of the South Korean group BTS.

At thirteen years old, Namjoon, under the stage name Runch Randa, was a part of the Seoul underground hip-hop scene and had collaborated with popular artists like Zico and Ugly Duck. South Korean rapper and entertainer Sleepy then discovered his talent during an underground crew audition. Sleepy linked the middle school student to Big Hit Entertainment. “Hitman” Bang, the CEO of Big Hit Entertainment, formed BTS because of Namjoon.

Namjoon debuted with BTS in 2013 under the name Rap Monster. As of 2017, he now goes by RM because it fits him better as an adult. As the leader of the group, RM is responsible for connecting the group’s aspirations to its business, mediating discords among members, and shaping the musicality of the group along with other members and producers. RM also acts as a songwriter, composer and producer for many BTS songs.

Aside from his activities with BTS, RM works on his own music. In 2015, he released his first mixtape, RM, which appeared on SPIN’s 50 Best Hip-Hop Albums of 2015.

Three years later, in 2018, he released his second mixtape mono., that made him the highest-charting Korean solo act on Billboard 200.

RM’s mono. has reached #1 on iTunes Album Chart in 123 countries, becoming the highest charting album in iTunes history worldwide. It’s even more impressive as the album was also available to legally download it for free.

He also frequently works with other artists. Over the years he collaborated, among others, with Krizz Kaliko, Warren G, Wale, HONNE, Fall Out Boy, and Lil Nas X.

Despite writing songs for BTS, and for himself, RM also wrote for other artists, including solo works of his band members, GLAM, HOMME, and TOMORROW X TOGETHER.

In 2015, as a part of the soundtrack of MARVEL’s Fantastic Four movie, he released “Fantastic.”

On September 2018, on behalf of BTS, Namjoon delivered a speech at the UN General Assembly as the group has previously worked with UNICEF to launch the “Love Myself” campaign, which advocated against youth violence. Later, in October 2018, along with the other members of BTS, he was awarded the fifth-class Hwagwan Order of Cultural Merit by the President of South Korea for the contribution to Korean culture.

In January 2020, he was promoted to a full member of the Korea Music Copyright Association (KOMCA). 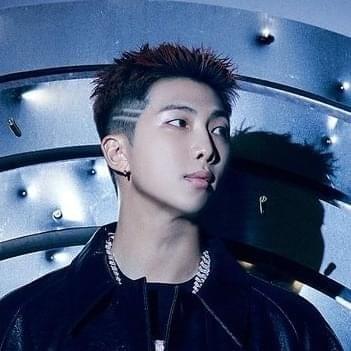