Felix Arvid Ulf Kjellberg (born in Gothenburg, Sweden on October 24, 1989) is a YouTube personality commonly known as PewDiePie. His comedy and video game commentary channel was YouTube’s most subscribed-to channel from August 2013 until April 2019.

Felix has garnered many awards and accomplishments throughout his career, some of which include “Most Popular Gaming Web Star” at the 2014 Teen Choice Awards. In 2016, he was included on Time Magazine’s list of The World’s 100 Most Influential People.

Toward the end of 2018, a company named T-Series was about to surpass PewDiePie’s subscriber number. On October 5, 2018, PewDiePie released “Bitch Lasagna,” a diss track directed at T-Series. When they passed him briefly, he uploaded “Congratulations,” a track which both congratulated and criticized T-Series' success. Although this did temporarily put him back at the number one spot, he was again passed by T-Series on April 14, 2019.

After a brief hiatus from making music, only releasing a Minecraft song called “Mine All Day,” Pewdiepie released “Coco,” a diss track aimed at a nursery rhyme channel on pace to surpass his record number of subscribers. Though the song itself was mostly satire, he also dissed Brooklyn rapper 6ix9ine because he “doesn’t like him.” 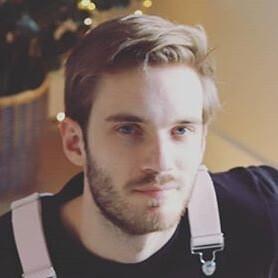