He spent his early childhood in California and moved with his mother to the town of Lawrence, Massachusetts when his father died, living with his grandparents. It was in his home town that he met and married his wife, Elinor, in 1895.

In 1894, he had his first poem, “My Butterfly: an Elegy,” published in The Independent, a New York City journal. in 1896. He attended Harvard University but had to drop out after two years due to ill health. In 1900, Frost moved with his wife and children to a farm in New Hampshire—property that Frost’s grandfather had purchased for them—and they attempted to make a life on it for the next 12 years. Though it was a fruitful time for Frost’s writing it was a difficult period in his personal life.

The Frost’s firstborn son, Elliot, died of cholera in 1900. After his death Elinor gave birth to four more children: son Carol (1902), who would commit suicide in 1940, Irma (1903) who later developed mental illness; Marjorie (1905) who died in her late 20s after giving birth, and Elinor (1907) who died just weeks after she was born. Additionally, during that time the farm failed to flourish.

However, Frost adapted to rural life and set many of his poems in the countryside. But while two of these “The Tuft of Flowers” and “The Trial by Existence” would be published in 1906, there was little interest from publishers in the rest of his work.

In 1912, Frost and Elinor sold the farm and moved to New Hampshire where he found a publisher for his first book of poems ‘A Boy’s Will’, followed by ‘North of Boston’ a year later. It was at this time that Frost met fellow poets Ezra Pound and Edward Thomas who were to influence and encourage him.

Frost, on a visit to England, credited Thomas’s long walks in the English countryside as the inspiration for his most famous poem ‘The Road Not Taken.’ The time Frost spent in England was a significant period in his life, but shortly after World War I broke out in August 1914, Frost and Elinor were forced to return to America.

Frost by now had acquired a positive repututation as a poet. His collection ‘Mountain Interval’ was published, and journals which had previously rejected his submissions were now keen to publish his work.

In 1915, Frost and Elinor settled down on a farm in New Hampshire. He taught at several colleges and attarcted good attendences at public recitals; a career that lasted forty years. During his lifetime Frost received mor than forty honorary degrees and awards honoring his work. He died in 1963. 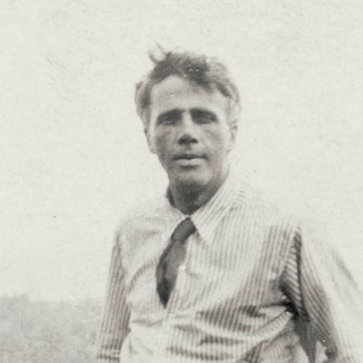