Halsey is the stage name of New Jersey singer Ashley Nicolette Frangipane. It is an anagram of her first name and reference to the Halsey Street subway stop and street in Brooklyn where she used to live. The bio on her website reads:

I am Halsey. I will never be anything but honest. I write songs about sex and being sad."

Halsey was diagnosed with bipolar disorder when she was 17. This has greatly influenced her creative process from the start of her career. Songs like “Control” and “Gasoline” explicitly delve into her psychological and emotional battles. Manic, Halsey’s third album and arguably her rawest and most emotionally vulnerable, was written in a fully manic state rather than a depressive one.

When Halsey was a teen with over 14,000 friends on MySpace, she posted covers of songs on YouTube. In 2012, she recorded “The Haylor Song,” a parody of Taylor Swift’s hit song “I Knew You Were Trouble” that created controversy over the nature of the lyrics. Nevertheless, she had accumulated a respectable amount of online attention, reaching 16,000 subscribers on YouTube at the age of 18.

In 2014, Halsey posted her first single “Ghost” on Soundcloud, which turned heads in her direction. Her close friend Anthony pretended to be her manager, accompanying her in various meetings with different record labels. After being signed to Astralwerks, she released her EP Room 93 in late 2014, with four of the five tracks carrying accompanying music videos, giving the EP a “visual” feel. She was the most mentioned artist online at SXSW 2015, which was evident by her ever-increasing fanbase. She reached over half a million followers on Twitter at the age of 20.

In anticipation of her debut effort, Badlands, “Hold Me Down” was released as a pre-order single, followed by “New Americana,” the anthem of today’s diversified generation. Badlands was officially released on August 28, 2015, described by Halsey as “an angry female record”. It also represents her mental state. At Firefly Music Festival 2015, she told an interviewer, “For me, it was about creating a universe and making it so that people felt like they were actually being transported somewhere.”

Halsey and Justin Bieber got together on the Skrillex-produced track “The Feeling,” which they performed together on the TODAY Show in promotion for Bieber’s fourth album Purpose. In 2016, she collaborated The Chainsmokers on the song of the summer, “Closer,” which would go onto become her biggest hit. The Grammy-nominated earworm maintained its reign at the top of the Billboardundefined Hot 100 for 12 consecutive weeks. Halsey later dropped “Not Afraid Anymore” for the soundtrack of the 2017 film Fifty Shades Darker.

Halsey’s sophomore album hopeless fountain kingdom was released June 2, 2017. The record’s title fulfills the long-debated acronym “HFK” that she continuously hinted at through the years. The album is inspired by the story of Romeo and Julietundefined. That same year, Halsey and her then-boyfriend G-Eazy released “Him & I.”

Halsey’s first track of 2018 was a feature on Thirty Seconds to Mars' “Love Is Madness.” The collabo track “Eastside” saw her teaming up with Khalid and benny blanco. Soon after Halsey dropped “Without Me,” the first single from her then-unannounced 2020 album, she and G-Eazy ended their on-again-off-again relationship, leading fans to speculate and later confirm that “Without Me” was about their very public relationship. “Without Me” hit #1 on the Billboard Hot 100, and in honor of its charting success, she dropped a remix with the now-deceased rapper Juice WRLD.

Halsey’s 2019 began with a collaboration with English rocker YUNGBLUD titled “11 Minutes,” Soon after, the pair confirmed they were dating The duo went on to record a cover of Death Cab for Cutie’s “I Will Follow You into the Dark” for triple J.

After years of friendship, Korean-pop group BTS featured Halsey in “Boy With Luv,” which broke YouTube’s record for most views on a music video in 24 hours, with 78 million views. As of October 2020, the video now has over 990 million views.

On May 17, 2019, Halsey released the stand-alone single, “Nightmare,” initially intended to be the first single of her third album Manic. Following this, “Graveyard” was released, with Halsey announcing that Manic would drop in January 2020. Singles “Finally // beautiful stranger,” “SUGA’s Interlude,” and “You should be sad” dropped in anticipation for the album.

Manic is Halsey’s first album that does not “hide behind a concept"—it’s fully raw nature brings forward her most vulnerable self. She told Rolling Stone that mania is "that thing in the back of our minds that drives us to outrageous thoughts. Like when you’re driving a car and you’re like [she mimes suddenly cutting over the wheel], or you’re on top of a building, and you’re like, ‘What if I just jump?’ … You are controlled by those impulses rather than logic and reason.” 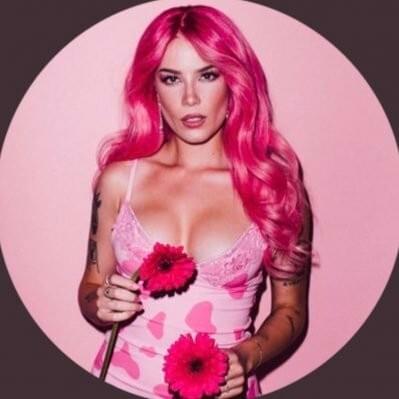